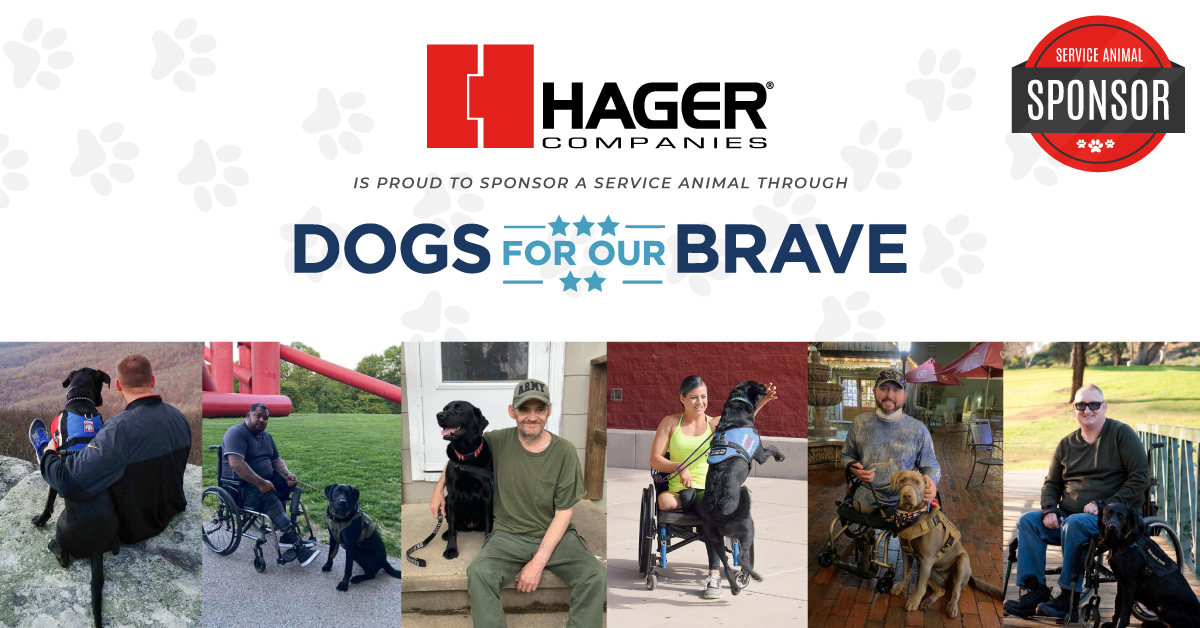 We have PAWsome news… Hager Companies is partnering with Dogs for our Brave!

Dogs for our Brave provides a professionally trained service dog, dog food, veterinary care, and pharmaceuticals for the life of the dog FREE of cost to the veteran.

That’s where we come in. Hager Companies is sponsoring a service dog! Our gift will cover the cost of professionally training one new service dog. The dog will begin training in December 2021, and the process will span the next 18 months.

our partner: Dogs for our brave

In May of 2013, Founder Andy Gladstein struck up a conversation with a man and his wife in Coronado, California. The man was a Navy seal who had been deployed 28 times.

Shortly after their first meeting, Andy and his Navy Seal friend were discussing what he should gift his wife for their upcoming anniversary. His friend suggested he buy a dog; have it trained and give it to a soldier that came back from war without limbs.

As a result, Gabby, a rescued mixed breed dog, was the first dog to begin training in mid-2013 and in 2014 she was placed with Chris.

What started as a one-time gift idea turned into an organization that selects and matches dogs with a veteran who is then trained as a service dog, free of cost to the veteran.

Their Mission: To provide professionally trained service dogs at no cost to veterans who have suffered debilitating injury or illness while in service to our country. Their goal is to use rescue dogs at every opportunity, thus saving two lives at once..

Welcome to your first pup-date🐾! Today, October 28, the Hager family met with Christina, the Executive Director, and Paul, Head Trainer, from Dogs for our Brave. During this meeting, we presented them with our gift that will cover the cost of professionally training one new service dog.

Although the dog we are sponsoring hasn’t been selected, they brought Diesel, one of their service dogs in training, with them. Diesel was happy to accept our check!

ways to get involved

Shop on Amazon using the url Smile.Amazon.com and choose Dogs For Our Brave as your charity of choice

Click below to see Hager’s current job openings, and apply to be a part of the Hager team today!